Saying “no” is hard for most of us because “no” often feels like rejection.

It’s a denial of a request. It can displease. And we routinely associate dissent with hostile disagreement. 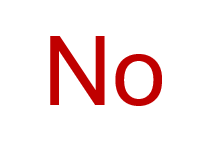 But turning things down or going against the grain is how you preserve your character and the shape of your life.

And the implications of saying no go up in certain situations such as being new to a group; having an insecure leader; or being part of a group that is exhausted and suffering from decision fatigue.

Organizational expert Joseph Grenny has these tips for saying no assertively and pragmatically:

Explain yourself. Share your thinking and logic when you say no, otherwise you come off as being difficult. State your dissenting conclusion up front and then explain how you got there.
Acknowledge the flipside. Few decisions are black and white. Be sure to recognize and respect others’ positions. It’s polite and persuasive.
Be confident, but not overly so. Refrain from grandstand statements like “The only logical conclusion…” or “The right answer is…” Instead, say “I believe…” or “I’ve concluded…”
Ask for permission to say no. When dealing with a boss or a group and you want to say no, ask for permission to explain your reasons. For example, “I think it’s a bad idea, and I’d like to share my reasons, but if you don’t want to hear them and think we should move on, I’ll be quiet. What would you like?” In most cases, a boss or group will feel obligated to hear you out.

Tact, empathy and critical thinking are crucial for saying no effectively.

And Grenny captures the value of saying no perfectly: “A sculptor creates a masterpiece from stone by subtracting the pieces that don’t belong. By the same token, it is what remains after removing those things you decline that becomes who you are.”