Jim Collins is one of the most accomplished business researchers and writers in the world. He wrote “Built to Last” with Jerry Porras (on the best seller list for 6 years), followed up by “Good to Great” (sold over 2.5 million hard cover copies) but “Great By Choice” might be his best work ever because it ties so much together. 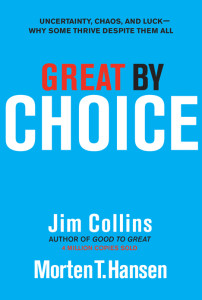 “Great” is a perfect blend of stories, concepts and performance data. Here are four essentials of being great worth remembering at all times:

1.  The 20-Mile March
The 20-mile march refers to a story about two explorers racing to reach the south pole. One wanted to get there as soon as he could so he traveled like a mad man and the second man had a plan. Every day they would walk 20 miles, no more no less.

Great companies (Collins calls them 10xers) have a long-term outlook that keeps them going year after year, always doing what they do best.

“10xers differ from their less successful comparisons in how they maintain hypervigilance in good times as well as bad. Even in calm, clear, positive conditions, 10xers constantly considered the possibility that events could turn against them at any moment.  Indeed, they believe that conditions will-absolutely, with 100 percent certainty-turn against them without warning, at some unpredictable point in time, at some highly inconvenient moment.  And they’d better be prepared.” – from Great By Choice

2.  Creativity is Worthless Without Discipline
Random creativity and innovation do not make a business great.

“The great task, rarely achieved, is to blend creative intensity with relentless discipline so as to amplify the creativity rather than destroy it.  When you marry operating excellence with innovation, you multiply the value of your creativity.”

3. Fire Bullets, Then Cannon Balls – Empirically Validate Major Initiatives
It’s much smarter to fail small then to gamble in a big way. Set up tests to see if ideas will fly and, at the very least, you’ll understand the market a little bit better.

“A bullet is an empirical test aimed at learning what works and that meets three criteria: a bullet must be low cost, low risk, and low distraction. 10Xers use bullets to empirically validate what will actually work. Based on those empirical validation, they then concentrate their resources to fire a cannonball, enabling large returns from concentrated bets.”

4.  Productive Paranoia
The term productive paranoia comes from CEO’s like Bill Gates at Microsoft who had a flourishing company but never became too proud or comfortable. Productive paranoia isn’t a negative attribute, it’s more of a strategy to ensure your business stays in business for years to come.

“10Xers remain productively paranoid in good times, recognizing that it’s what you do before the storm comes that matters most. Since it’s impossible to consistently predict specific disruptive events, they systematically build buffers and shock absorbers for dealing with unexpected events.They put in place their extra oxygen canisters long before they’re hit with a storm.”